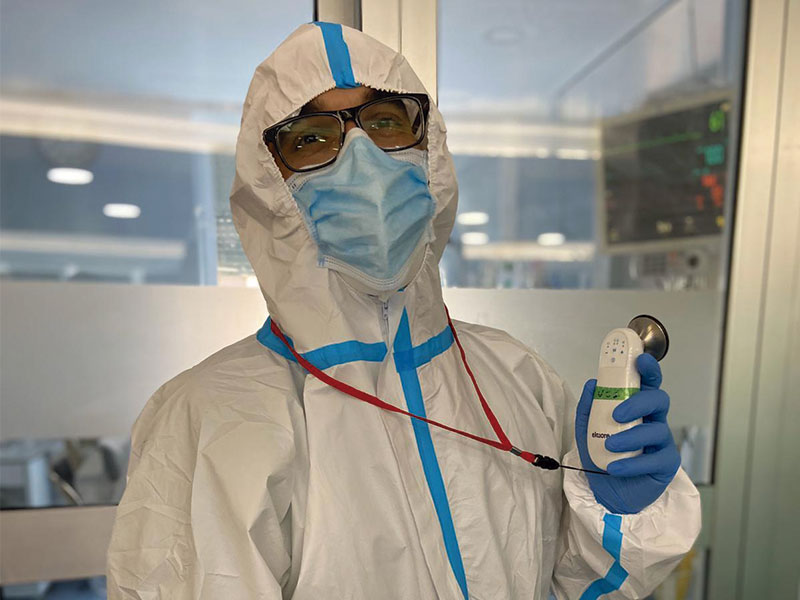 eKuore electronic and wireless stethoscope has proved to be a highly effective tool to reduce the risk of infection during this COVID-19 crisis.

Valencia, 9 April 2020. The eKuore electronic and wireless stethoscope has proved to be a highly effective tool to reduce the risk of infection among health professionals during this COVID-19 crisis.

Its value to doctors in preventing infection and its potential as a diagnostic tool in the telemedicine field have led to a three-fold increase in demand for these devices in recent weeks, with production capacity doubling to cope with all the requests coming from all over Europe and the rest of the world.

The biggest problem health professionals encounter when performing auscultation with the traditional stethoscope is that the distance from the patient is minimal, and manipulating the device with the protective equipment is quite complicated.

Santiago Figueroa, Thoracic surgeon at the Hospital Clínico de Valencia, comments that ‘the eKuore electronic stethoscope enables us to listen to the patient through wireless headphones and optimum sound quality, maintaining a greater safe distance and significantly reducing the risk of infection by the virus. Its system of interchangeable bells facilitates disinfection and is very useful.

In general terms, I would say that the user experience is very positive. The device connects via APP to our phones, and in some cases we can even perform the scan from outside the room or ICU box, with the help of the nursing staff. This has the added benefit of saving on personal protective equipment. So the advantage is threefold: better protection of health personnel, savings on PPE and high quality auscultation‘.

On the other hand, the high demand for telemedicine services currently taking place in this health crisis, makes this device indispensable for companies that offer such services, since it enables remote patient monitoring, thus avoiding unnecessary trips to doctors’ offices or hospitals.

The Valencian Start-up has expressed its solidarity with the current situation of the health care system, and has so far donated a total of 18 devices to 3 Valencian hospitals, which have been very well-received in the fight against the pandemic, of which 8 have been delivered to the Hospital Clínico de Valencia, 5 to the Hospital General de Valencia, and 5 to the IMED Valencia Hospital. According to eKuore’s CEO, Rubén López: ‘the company’s goal is to donate up to 50 units to different hospitals throughout Spain in the coming weeks’. The total value of the equipment amounts to €24,000

eKuore opened a funding round through Capital Cell before the state of alarm was declared, which was fully raised in just two weeks, reaching €600,000, €100,000 more than the target established initially

The company has been profitable for two years, with a turnover of 2.5 million, and already markets its telemedicine and veterinary electronic products in over thirty countries.

They are also currently working with Boehringer Ingelheim, a multinational pharmaceutical company, on the development of an early detection system for Idiopathic Pulmonary Fibrosis (IPF), and with the Health Research Institute (IIS) La Fe on the detection of heart murmurs.

Do you want more info about the eKuore Pro stethoscope?

The second quarter of 2020 began with a pandemic and the lockdown of the entire world. Despite this, eKuore improved its...

Uses of the eKuore Pro electronic stethoscope to reduce the risk of contagion during COVID-19.

The most critical measure being taken to control the spread of COVID-19 is to reduce the risk of contagion. Medical professionals...

Summary first quarter of 2020 of eKuore

The year 2020 began with big plans for eKuore, new distributors and integrators that will allow reaching more places and countries,...

The second quarter of 2020 began with a pandemic and the lockdown of the entire world. Despite this, eKuore improved its...

Uses of the eKuore Pro electronic stethoscope to reduce the risk of contagion during COVID-19.

The most critical measure being taken to control the spread of COVID-19 is to reduce the risk of contagion. Medical professionals...

The device allows for remote auscultation, reducing the risk of infections The Valencian Start-up will donate up to a total of...

How can we help?

You need a healthcare professional account to be able to buy or see available official distributors in your country and access all documentation.

Would you want to be a distributor? Write us below and we will contact you.

This product is not available for online purchase in your country. Please fill in the form and we will inform you about the price and availability